Sound Audio Repair is owned and operated by Sam Gray and currently employs two additional technicians, Gemma and Kevin, as well as a customer service person, Ethan. If you get in touch, you will most likely get an email reply from Ethan; if you call the shop it might be any of us answering the phone. 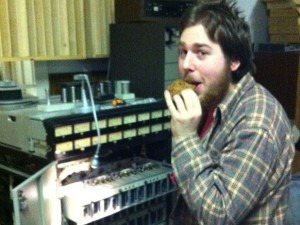 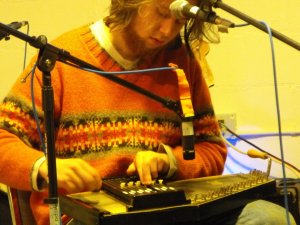 Sam has worked in audio repair in Olympia since 2011, learning his trade as the technician at local recording studio Dub Narcotic Studio. He loves working on equipment new and old and is particularly experienced with analog tape machines (of which DNS had 5 or 6).

Sam is also a local recording engineer, live-sound engineer, and musician. You may see him around town working sound for a show, or performing with his solo project Woolen Warrior, or in The Beauty.

Gemma has been repairing and building her own audio equipment for more than 10 years. She has designed and built a variety of equipment ranging from guitar effects pedals and synthesizer modules to tube amplifiers and stereos. As a technician she specializes in repairing vintage synthesizers, guitar amplifiers, effect pedals, receivers, and power amps. She enjoys working on unique and oddball gear and loves a challenge.

Ethan is Sound Audio Repair’s resident “people person.” His tasks include facilitating gear intake and outtake, translating technician’s exam notes into formal estimates, invoicing, as well as any other general communications with our customers. He also runs social media and shop-refurbished equipment sales.

Ethan is a musician and recording engineer who has been active in the Olympia music scene for a decade. He enjoys building his own recording equipment and tracking drums to tape. He has played in bands including We Play Quiet and Ēōs, and has recorded bands including Vouna, Mortiferum, and Eigenlicht. He just built a yurt with his wife and cattle dog mutt in NW Olympia and is also in the process of building a mix room.